Looking for a Luxury Staycation? Here Are 7 New Design-centric Hotels Ready for Check-in!

With 7 New Design-Centric Hotels, Los Angeles Is Officially Back in Action
Via AD 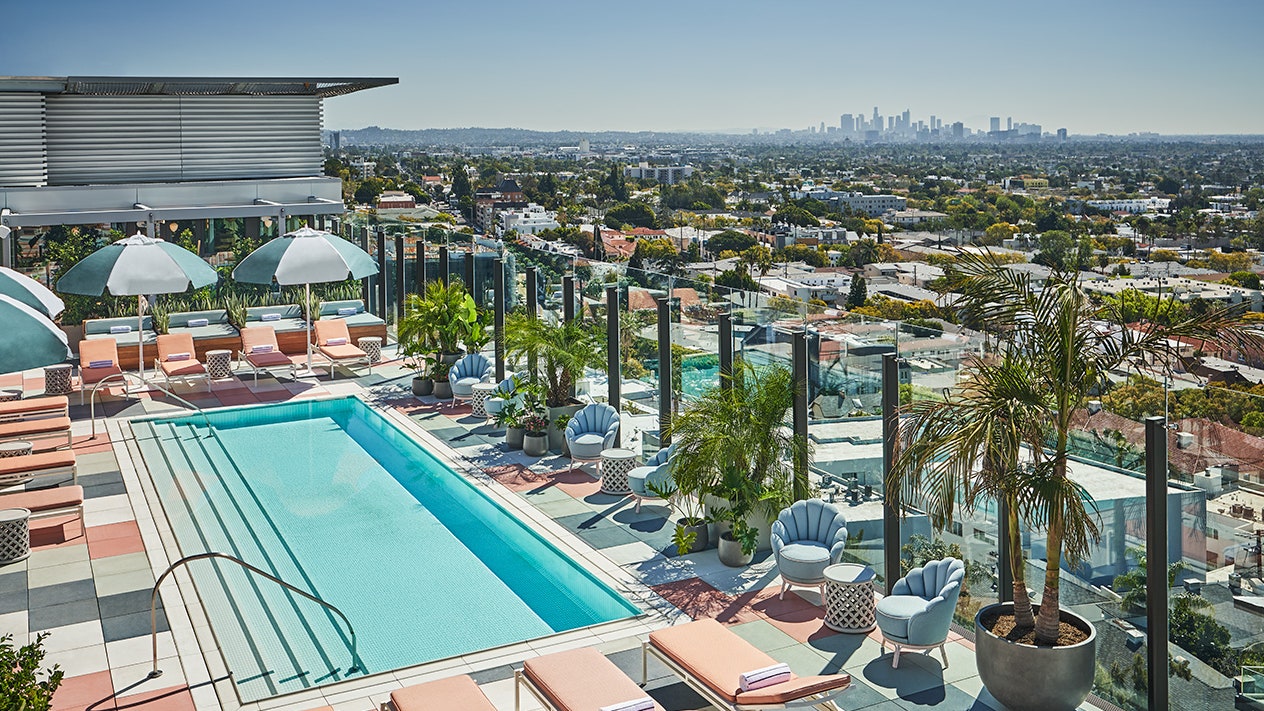 The brand new pool terrace at the Pendry with a view over West Hollywood. Christian Horan Photography
After a year of sheltering in place, the idea of sleeping on crisp white sheets, slipping into a plush terrycloth robe, and enjoying room service in bed is finally not such a distant dream. In fact, hotels are coming back better than ever—especially in Los Angeles, where the sweeping views are as beautiful as the year-round weather. Plus, the City of Angels is making up for lost time with a bevy of new haute hotels from which even born-and-bred Angelenos won’t be able to keep away.
So whether you’re flying across the country for a much-needed vacation or booking a room for a weekend getaway, you’re in for a treat. From the iconic Fairmont Century Plaza, which recently underwent a $2.5 billion redevelopment, to Pendry West Hollywood (Martin Brudnizki’s latest masterpiece), these chic lodgings are making Tinseltown shine even brighter. 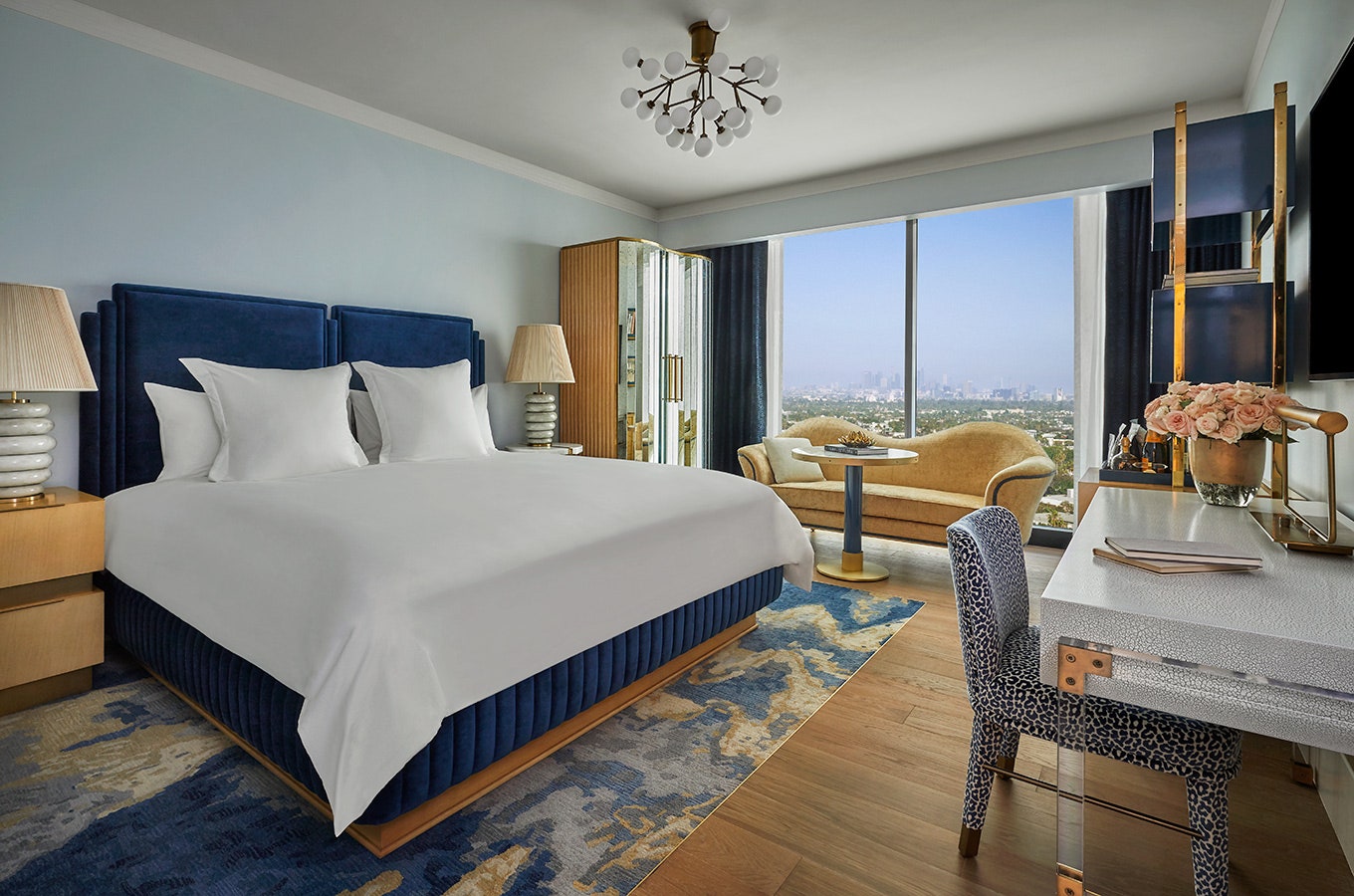 Inside one of the glamorous rooms at the Pendry designed by Martin Brudzinski., CHRISTIAN HORAN PHOTOGRAPHY

Pendry West Hollywood
The latest property in Pendry’s portfolio (and the first in Los Angeles), the Martin Brudnizki–designed Pendry West Hollywood, which opens for business (and pleasure) on April 2, boasts 149 stylish guest rooms inspired by ocean waves and dusky skies and 40 residences with intoxicating views of the Hollywood hills. “When I think of Los Angeles, I think of color. There aren’t many cities that offer such a vivid and iconic palette,” Brudnizki notes. Equally as important as the palette, the shapes—not just in the furniture but also on the walls—make a big impact. Brudnizki explains, “West Hollywood has a sense of style that is as much about comfort as it is glamour, and so the interiors had to feel soft and tactile while at the same time a little decadent. To juxtapose with the soft lines, we used a few geometrics in the wall treatments, upholstery, and floors, which give the interiors a certain energy and dynamism.” With a goal of introducing Hollywood glamour to contemporary comfort, Brudnizki has outdone himself.
The hotel isn’t the only new outpost in the building: Legendary chef Wolfgang Puck’s latest eateries Merois and Ospero also occupy the space. The former’s menu has an undeniable Japanese, Southeast Asian, and French flair—with a hint of California flavor—while the latter feels a bit more like a casual European-style cafe. Whether you’re noshing on a crispy-scale whole black sea bass at Merois or biting into a house-made pizza at Ospero, you’ll be ready for a post-dinner disco nap in your sizable space. 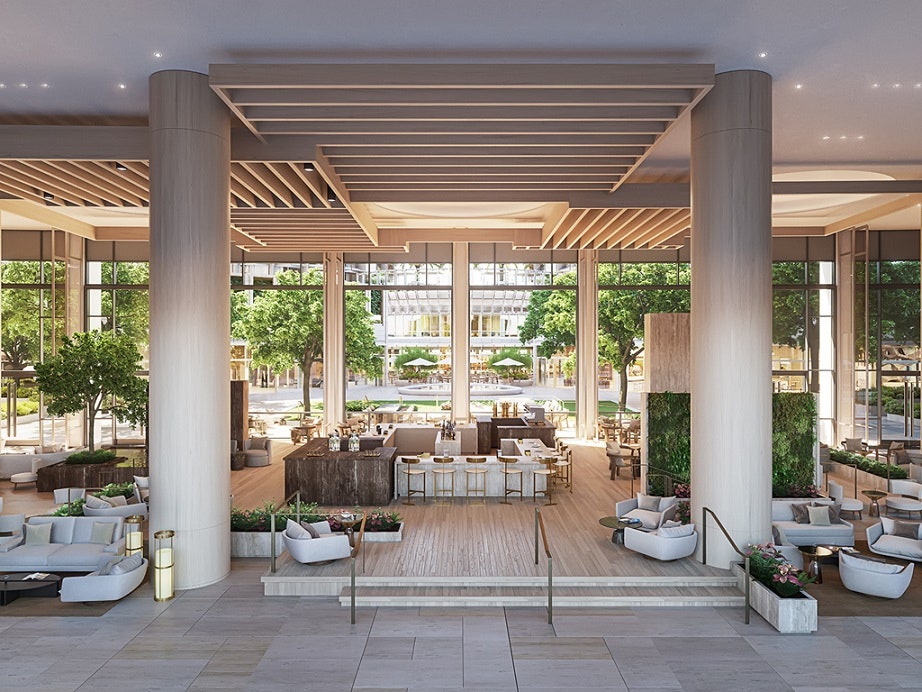 The brand new Lobby at the Fairmont Century Plaza.
Fairmont Century Plaza
The same way some friends and family members have emerged from their time in quarantine looking better than ever, Lala Land’s famous Fairmont Century Plaza spent about $2.5 billion on a makeover——and, on June 7th, it will open its doors once again. The brand-new space, set on a former movie studio from the 1950s, is the hotel equivalent of pure luxury. Though the original bones of the architect Minoru Yamasaki's midcentury-modern structure remain, the redeveloped Fairmont Century Plaza is almost unrecognizable on the inside—in the best way.
Plus, with four dining spots—the American-style brasserie at Lumière, a relaxed café at Vignette, the wall of windows at The Bar at Century Plaza, and the guests-only pool and bar on the roof—you won’t get bored. 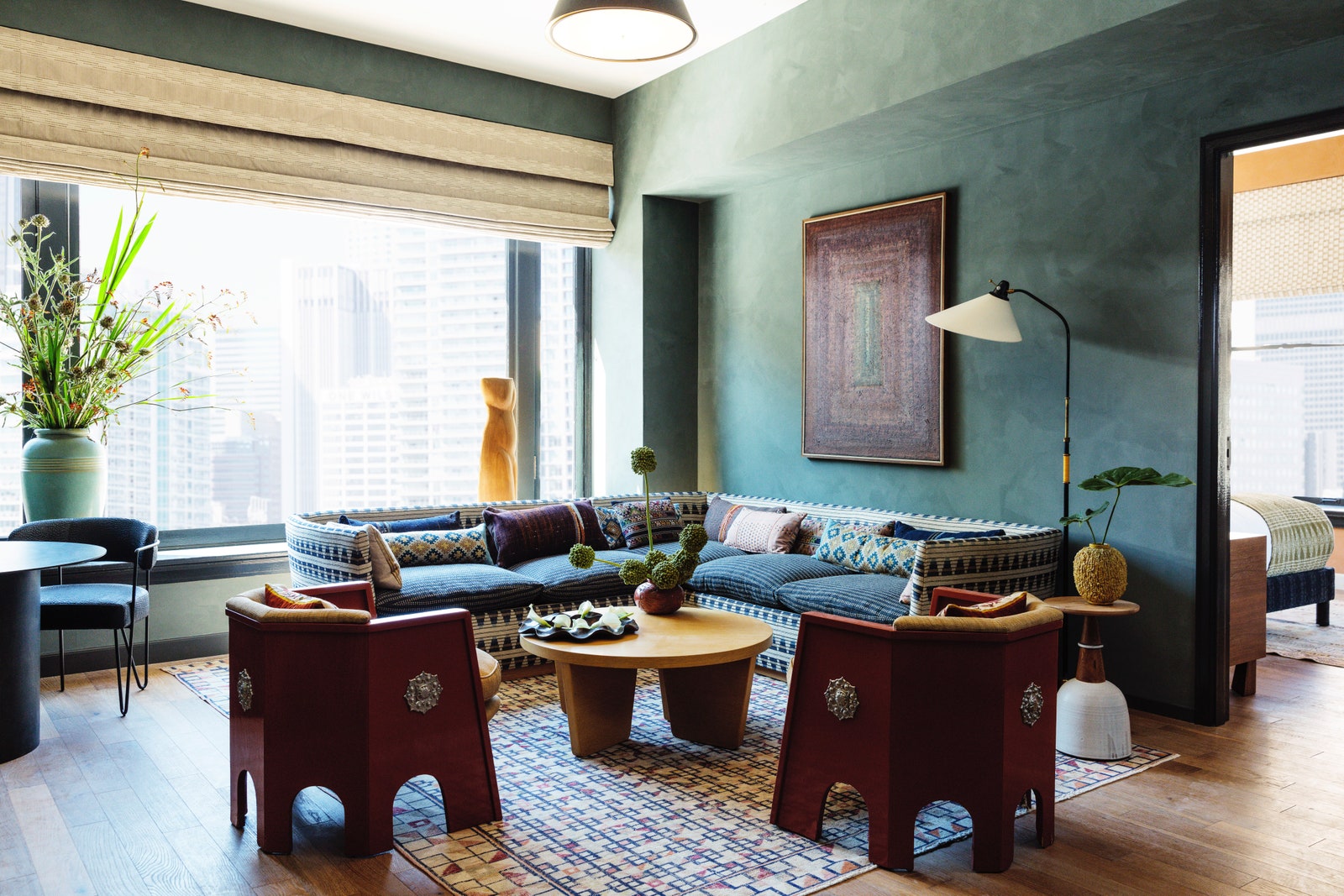 Inside one of the luxurious suites at the Downtown L.A. Proper, designed by AD100 superstar Kelly Wearstler.
Downtown L.A. Proper
Set right smack-dab on the historic Broadway corridor, Downtown L.A. Proper will serve as the creative vision of interior design legend Kelly Wearstler come to life in early June. Set in a totally reimagined 1920s California Renaissance Revival building, the space does not disappoint: Wearstler swathed the walls in a muted jewel-toned palette of seafoam greens, rich lavenders, and matte coppers and opted for complementary pieces in earthy tones and soft-to-the-touch textures. Ever the globe-trotter, Wearstler finds influence all over, from Mexico to France to Morocco, with pops of classic modernism and 1920s elements throughout.
When it comes to the design, Wearstler clearly took the helm, but for the resident restaurants, she passed the baton to James Beard Award–winning chef Suzanne Goin and restaurateur Caroline Styne, whose creative genius shines on the menu, boasting international flavors from Mexico to Portugal and beyond. Don’t forget to check out the scenic rooftop pool deck for unparalleled views of the city. 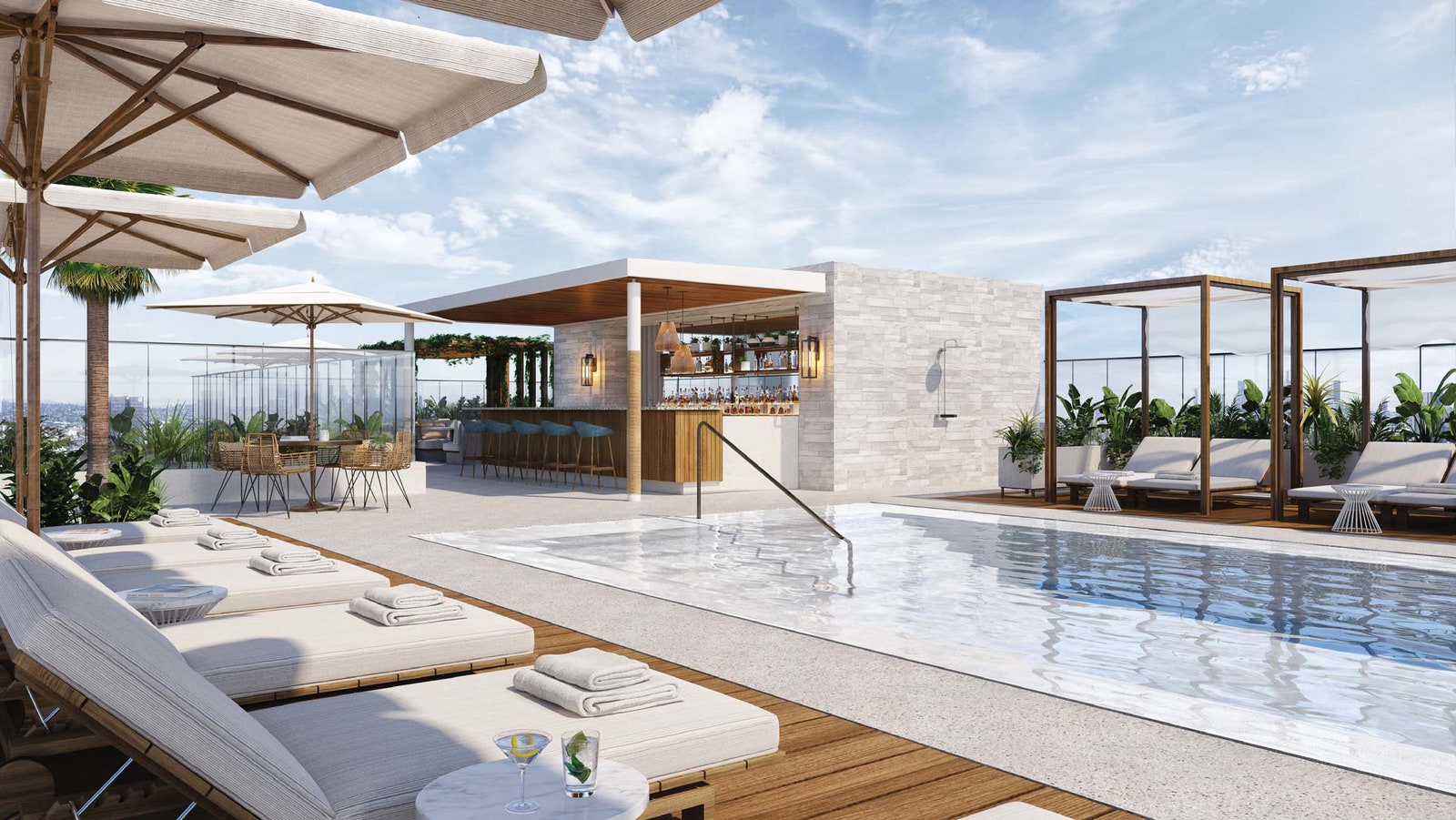 The swanky rooftop pool terrace at the Thompson Hollywood.
Thompson Hollywood
Housed above L.A.’s vibrant Vinyl District, Thompson Hollywood will make quite the splash when it opens in October (not from the rooftop pool, though). The glamorous Tara Bernerd & Partners–designed space, complete with two restaurants helmed by world-renowned chefs and 190 guest rooms (with 24 suites), makes a convincing case for boutique hotels. Not to mention, like most Thompson outposts, the new Hollywood location is cool enough to attract locals. 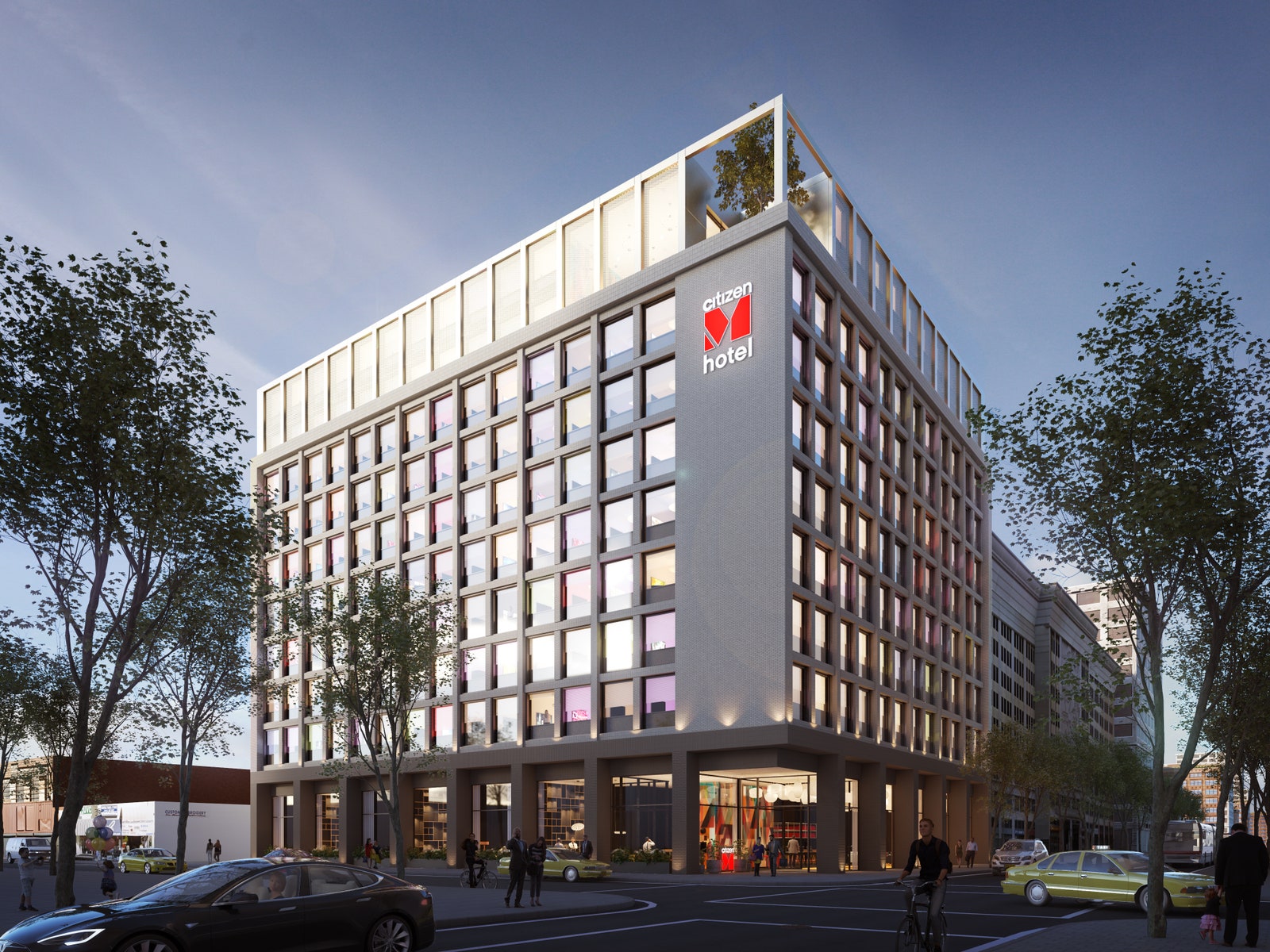 Outside of the newest outpost of CitizenM in the trendy area of downtown LA.
CitizenM
With high-tech hotels in Paris, Copenhagen, and Taipei, it’s about time the Netherlands-based CitizenM opened an outpost on the West Coast—in downtown Los Angeles, to be more specific for a late-summer debut. The idea behind the uber-modern brand is to offer luxury at its finest but without the price tag that’s usually attached. The 315 rooms, designed by the brand’s longtime design partner Concrete, are stacked atop a colorful lobby where lounging, dining, and drinking are all encouraged. In other words, if the CitizenM were a high school, the cool kids would be hanging out in the ultra-contemporary lobby. 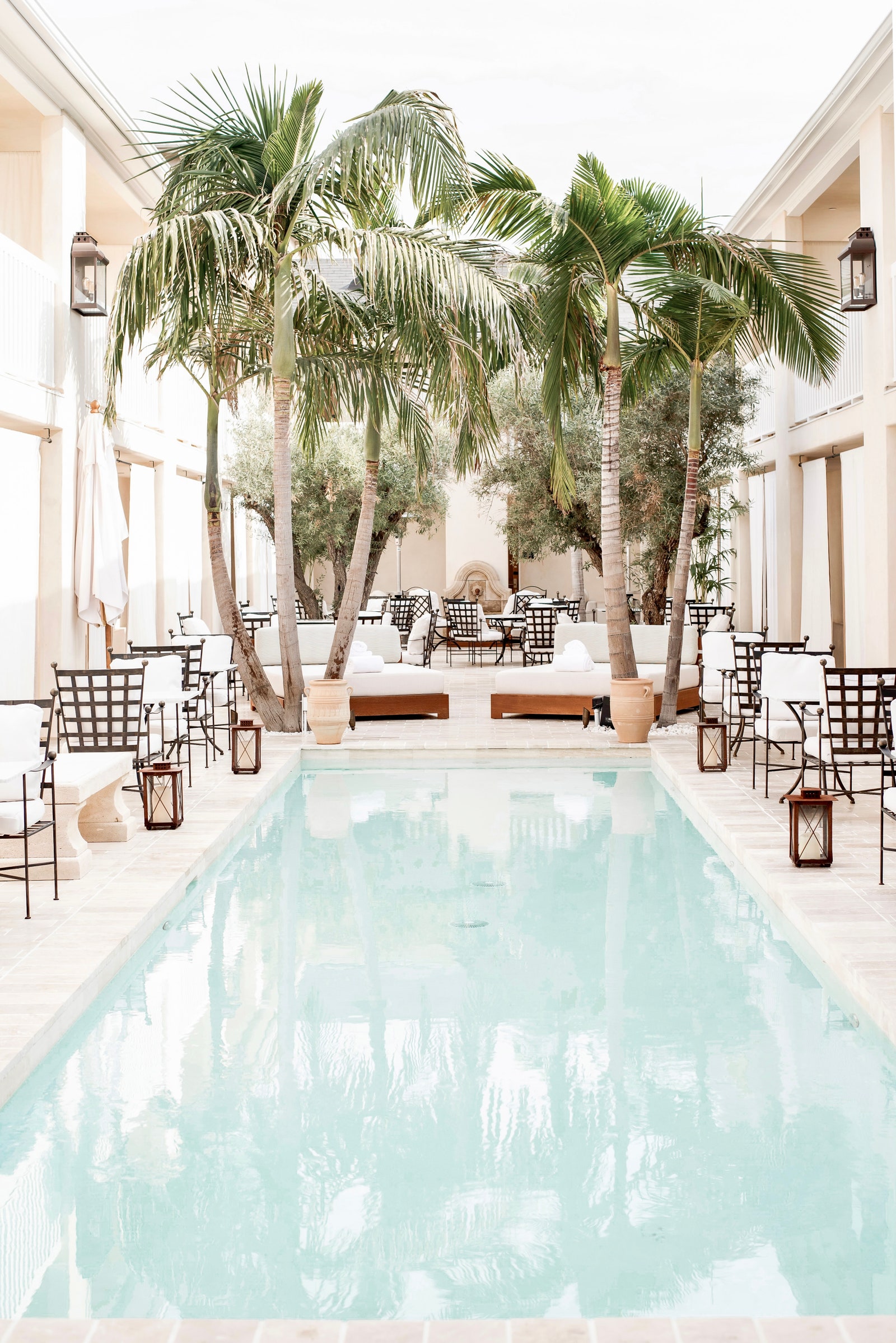 The courtyard oasis at the Cara hotel.
Cara
Located at the foothills of Griffith Park, the newish Cara is like a serene 60-room spa that you can sleep in. Outfitted in bright white, hand-woven rattan and glossy greenery, the former 1950s motel is a one-of-a-kind nod to California living like we’ve never seen. Plus, the abundance of natural and organic elements, including the light oak and creamy limestone, doesn’t hurt. The pièce de résistance? An open-air courtyard, which features a reflecting pool, plush seating area, and 100-year-old olive trees.
With an emphasis on Californian beauty, each guest room boasts curated photography by local artists Natalie Obradovich and Isabelle Aubin. The California theme continues in the restaurant with Michael Patria designing a restrained yet elegant menu of delicious dishes, all of which are made with home-grown ingredients.

The grand facade of the Maybourne Beverly Hills., DANIELLE HAMILTON
The Maybourne Beverly Hills
If you’ve ever had the delight of spending a night or two in London’s famed Claridge’s, The Connaught, or The Berkeley, then you know what to expect upon walking through the doors of The Mayborne Beverly Hills, the luxury hotel group’s first international hotel. Even though the British hotel developers expanded to the U.S., they enlisted a fellow U.K. resident to design the L.A. hot spot’s interiors: Bryan O’Sullivan. The tasteful interiors are done in a mix of warm neutrals, giving the grand space a cozier and more intimate feel in all the right ways.
There’s no better way to unwind than on The Terrace, an alfresco dining concept overlooking the extremely well-groomed Beverly Cañon Gardens. What’s more: Enjoy Maybourne’s Mobile Mixologist wherever you happen to be (as long as it’s slightly near the hotel). The new beverage program serves up classic sips from the menus of both the Maybourne Bar and all of its sister hotel bars. After all, there’s no better way to make friends with your neighbors than to offer them a carefully crafted cocktail.
For more, visit Architectural Digest